SWIFT was founded in Brussels in May 1973, supported by 239 banks in 15 countries. Its initial objective was to establish common data standards for financial transactions under a shared data processing system and worldwide communications network. The first SWIFT message was sent in 1977.

Since then, SWIFT has become the primary global system for international fund transfers. More than 11,000 SWIFT member institutions in over 200 countries sent over 35 million transactions per day through the network in 2020. The organization recorded an average of 41.8 million messages per day on a year-to-date basis as of July 2021[i] with an estimated value of $5 trillion per day in funds movement.

SWIFT is solely a messaging system. It does not perform any type of settlement between financial institutions. This is an important distinction from Fedwire and CHIPS, the two other most widely used wire transfer systems. To further understand this difference, let’s explore some of the fundamentals of electronic funds transfers.

Any type of electronic funds transfer has two primary components: (1) the message; and (2) the settlement of the payment.

A wire transfer message is a set of instructions specifying who is sending the money, to whom, and through what financial institutions. The message might also include additional information about the purpose of the payment, special posting or notification instructions, etc.

Settlement is the process by which the receiving financial institution obtains the money in order to disperse it to the recipient. For example, imagine Bank A’s customer is sending a $10,000 wire transfer to Bank B’s customer. Bank A sends a message to Bank B stating “post a credit to your customer’s account for $10,000 coming from our customer on this date.” When Bank B posts this credit to its customer’s account, Bank A owes Bank B $10,000. The wire transfer system used by these two banks determines how the message is transmitted and how Bank A and Bank B settle up the amount owed.

Settlement of payments between financial institutions occurs in one of two primary ways:

Once two financial institutions have established a correspondent relationship, each creates accounts on its books representing (1) funds due from the other institution (a receivable, or asset) and (2) funds owed to the other institution (a payable, or liability). These accounts are often referred to as “nostro” and “vostro” accounts. These are Latin words meaning “ours” and “yours” respectively. A nostro account would be a receivable (“our” money) and a vostro account would be liability (“your” money). 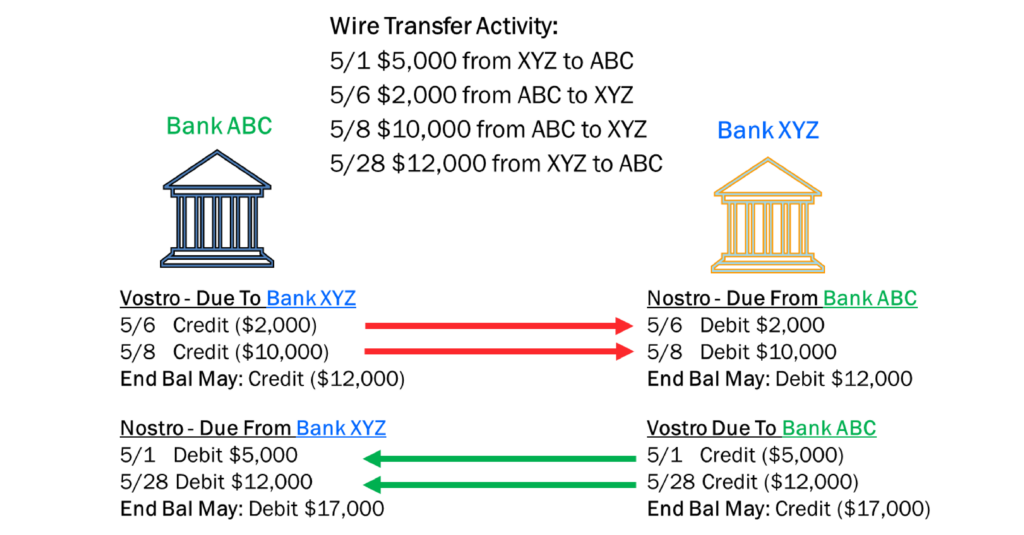 Financial institutions entering into correspondent relationships perform extensive due diligence on one another, including evaluating the institution’s creditworthiness and stability. This is because a nostro account represents, in effect, an extension of credit from one bank to another.

Mechanics of a SWIFT Wire Transfer

Remember, SWIFT is only a messaging system – no settlement is involved. The two key elements of the SWIFT system are (1) the financial institutions’ identifiers and (2) the message types.

Each financial institution involved in a SWIFT message is identified by a “BIC” or Business Identifier Code.

The BIC is an alpha-numeric code of eight to eleven characters. Financial institutions may establish different BICs to use with specific types of messages, or for other internal accounting purposes. For example, Bank of America N.A. has forty-four BICs. Here are three:

SWIFT provides a searchable database of all BICs used on its network, available at https://www2.swift.com/bsl/. The database provides the full name of the institution, its address, and the meaning of any branch identifier. For example, the Bank of America branch identifier “FPS” represents “funds processing system” according to the SWIFT database.

The SWIFT system is used not only for payments but also for many other types of transactions and communications between member financial institutions. The nine high-level categories (or series) of SWIFT messages are as follows:

Each specific message type begins with the letters “MT”. Within each series are many sub-categories of messages. For example, the most commonly used message types in the MT-100 and MT-200 series include:

It’s estimated that 70% to 80% of all SWIFT messages are for payments. Yet as illustrated above, messages could be related to foreign exchange, export letters of credit, securities trades, and others, including general correspondence between banks. 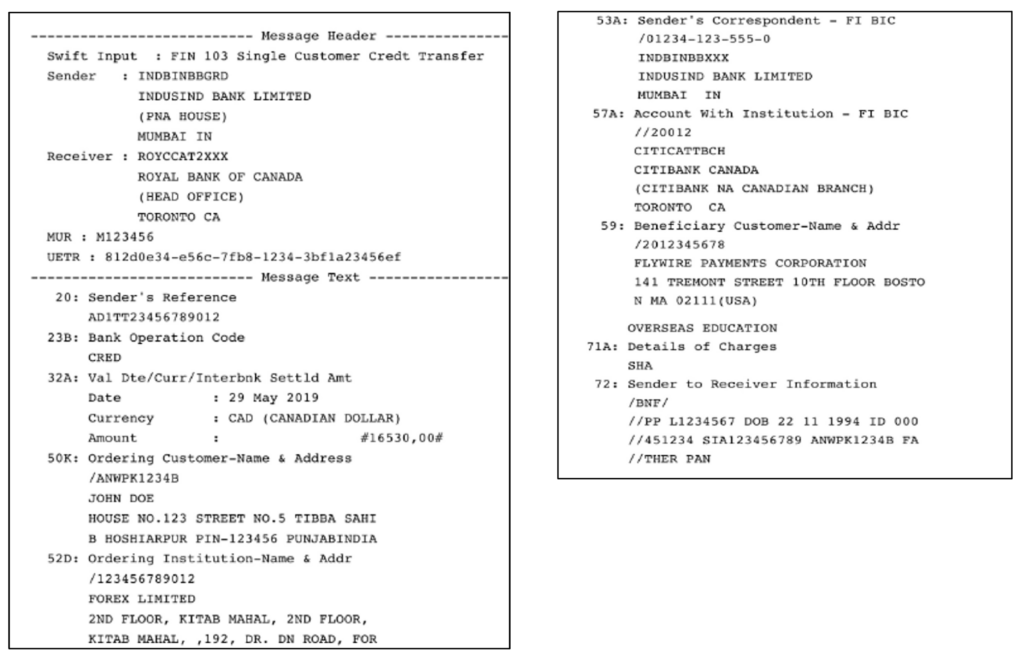 The fields of greatest interest to compliance professionals, particularly for suspicious activity monitoring and sanctions screening, are as follows: 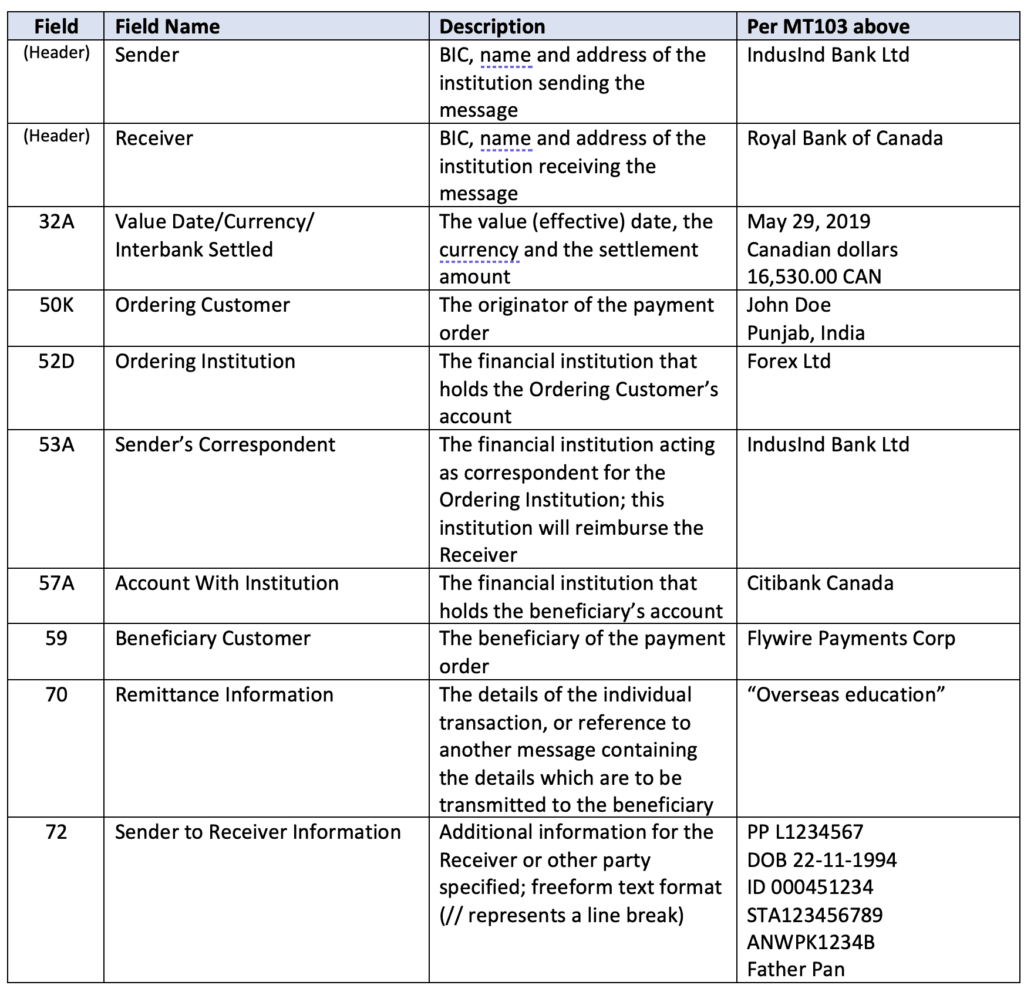 Because this funds transfer involves multiple banks, two SWIFT MT-103’s will ultimately be created: the first one, as illustrated above; and then a second message from Royal Bank of Canada to Citibank Canada. The entire transaction is diagrammed below: 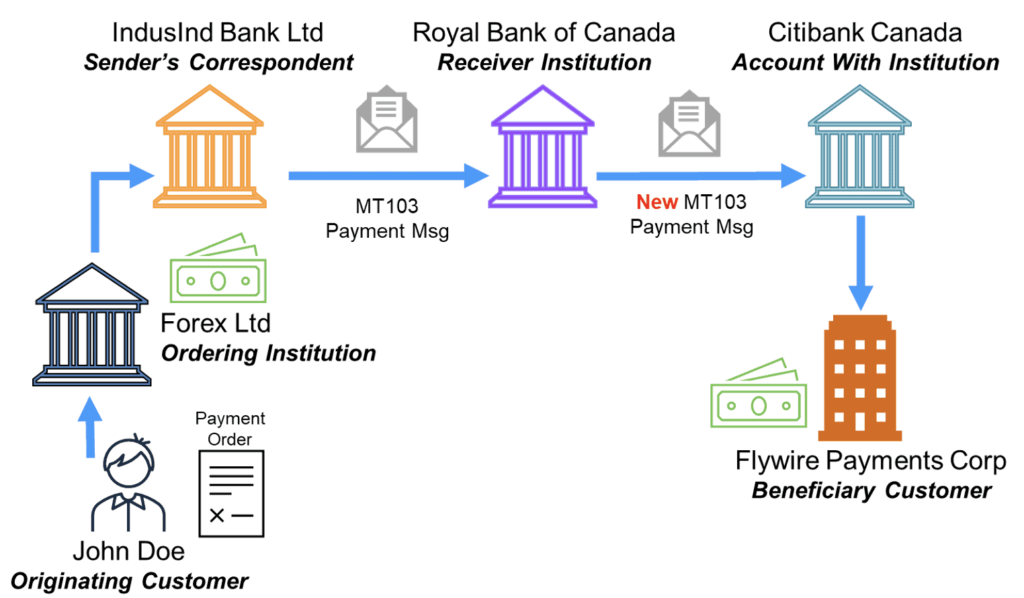 What is a SWIFT Cover Payment?

When the originator’s bank and the beneficiary’s bank don’t have a correspondent relationship established, each must involve their own correspondent bank in order to transfer the funds.

To complete the funds transfer, two separate SWIFT messages are used. First, an MT-103 Single Customer Credit Transfer is sent by the originator’s bank directly to the beneficiary’s bank, advising them of the details of the transfer to their customer. However, because these two banks don’t have a correspondent relationship, the payment cannot be settled between them. Instead, both banks must use intermediaries.

Historically, an MT-202 General Financial Institution Transfer message was used to instruct the intermediary/correspondent financial institutions to make the necessary settlement entries for the payment.

This absence of underlying transaction details led to heightened concerns about money laundering and sanctions violations, because the intermediary banks that were moving money across the banking network could not perform anti-money laundering monitoring, sanctions screening, or other risk-based analysis to comply with their specific banking laws.

In response to these concerns, in 2009 SWIFT created a new payment message designed specifically for cover payments: the MT202 COV. This message type includes all the detailed information from the underlying MT-103, thereby allowing the intermediary banks full access to all the payment information. SWIFT participants are now prohibited from using the MT-202 for cover payments.

This illustration depicts a typical cover payment scenario. Mitsubishi UFJ’s customer is sending a wire transfer to a beneficiary in Bosnia whose account is at ASA Banka. Mitsubishi and ASA Banka do not have a correspondent relationship. Mitsubishi sends an MT-103 payment message to the beneficiary in the local currency, which is the Bosnian mark (BAM); however, ASA Banka replies that it wishes to be reimbursed for this payment in the equivalent U.S. dollars.

Details of the entries in the respective intermediary banks’ correspondent accounts is illustrated below:

Wire transfers are heavily utilized in the layering phase of money laundering. SWIFT wire transfers are the primary method of moving funds across borders, resulting in a higher risk for both money laundering and economic sanctions violations. Accordingly, compliance professionals should understand the fundamentals of SWIFT messaging, payments, and the underlying correspondent relationships that facilitate them, in order to more effectively monitor for and evaluate suspicious customer activity and sanctions violations. Check out our AML solution for payment processors to strengthen your compliance program.

Contact us today to learn how Alessa can help with real-time transaction monitoring and screening for your financial institution, and view our article on ACH vs. wire transfers for more compliance information on electronic payments.

[ii] U.S. based CHIPS utilizes a hybrid settlement system combining real-time gross and daily net settlement, which is beyond the scope of this article. Further detail on CHIPS may be found at www.theclearinghouse.org.

[iii] Formerly known as a Bank Identifier Code, or simply “SWIFT code,” the BIC format has been standardized under ISO 9362 and renamed Business Identifier Code.

What Are the Key Differences Between AML, CDD and KYC?

An overview of AML, CDD and KYC and their similarities and differences.

Are casino compliance software solutions worth it? Learn about the pros and cons of implementing technology with your compliance program.

Stay up to date with the latest advisories and guidances from FinCEN as they become available.

Join the thousands of AML professionals who receive our monthly newsletter to stay on top of what is happening in the industry. You may opt-out at any time.